A while ago I spoke to Renske.

And Renske made a stimulating remark about titles.

‘You can easily brainstorm for an hour about an appealing title. Even though a title only consists of a few words.’

Okay, take a step back.

Who is Renske?Renske is a teacher-researcher at Hogeschool Utrecht. Her subject is ‘youth’.

For a new website, she called in my colleague Priscilla.

The website describes nine working methods. And those methods have titles.

Two of the original titles were ‘Triade Conversation’ and ‘Multiactor Intervision’.

‘Erm, what do you mean?’ ‘If you want to recruit people, you really have to come up with another name.’

That’s why Renske decided that things had to be done differently. And that it could take some time. To make sure the titles would evoke curiousity.

Do you ever create titles yourself? For your report, your presentation or your project?

Invest time, brainstorm, come up with alternatives and check them with your target audience.

PS You can read the entire conversation with Renske below. The communication lessons from her project are, for example, about dealing with a broad target audience, formulating calls to action and informal writing. And you can read what the new titles are. 😉

PPS Do you want to work with us in your communication project, just like Renske? Email me or leave a message on our website! 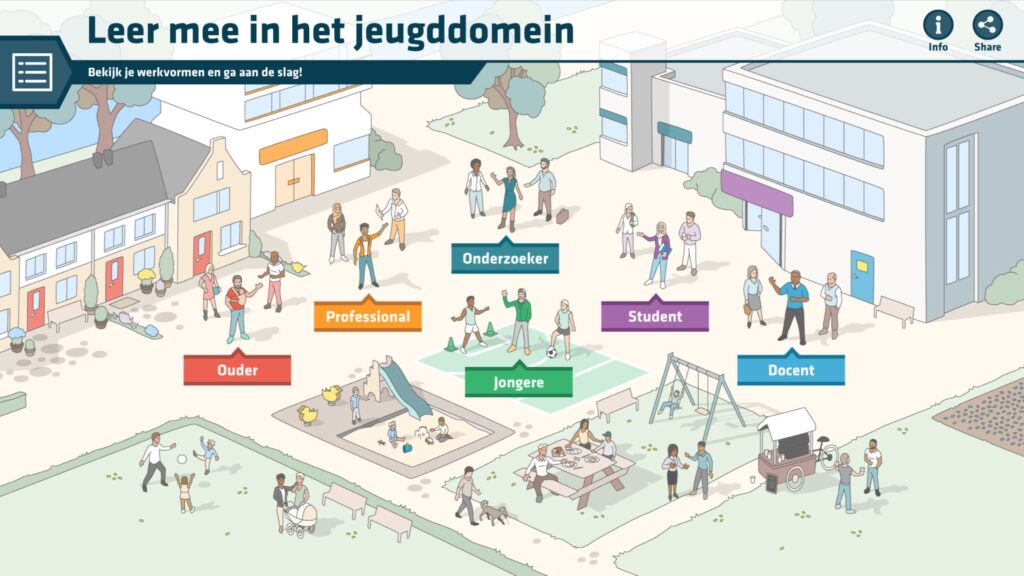 Getting used to an informal writing style

How do you address many different people at the same time? That was one of the most important questions in the project called ‘Learn with us in the youth domain’. Teacher-researcher Renske Schamhart, from Hogeschool Utrecht (HU), wanted to share working methods with ‘the entire youth domain’ on a website. This domain extends from crèche to neighbourhood team and from university to juvenile detention.

In the project, it quickly became clear that the website has six target audiences: young people, parents, researchers, professionals such as youth care workers, and teachers and students from courses such as pedagogy and Social Work.

Renske: ‘On the website, we gave each target audience its own color and ‘character’. For example, the parent character is a father with a baby in a carrier. The associated color is red. If you click on a character, you’ll see the working methods that are interesting for that target audience. So you can click through the site from your own perspective.’

What’s in it for me?

If visitors just click around, it’s not enough: they also have to do something with the working methods. And for that, they need to be motivated.

Renske: ‘On the website, we didn’t only describe what the working method entails, but also what it yields. The only thing was, that differs per target audience. A teacher doesn’t get the same out of a working method as a professional. That’s why we answered the same question from the perspective of each target audience: What’s in it for me?’

A related question is how exactly the audience should get to work with the working methods. Renske: ‘Through conversations with Priscilla, I started to think about this a lot more. We wanted to include a clear call to action, instead of just inform. At first glance, the call to action seems clear: choose your working method and get to work. But a student, for instance, can’t do this on his own initiative. He will link up with a teacher or with someone from a network who organizes a working method. So you have to find out for each subgroup how you can help them to get started.’

Away from ‘university worthy’

The style of the texts on the website is informal: short sentences and accessible language. Some sentences are even incomplete. A sentence that, for example, starts with ‘And’. When you read the texts, it’s almost as if someone is talking to you. Because Renske works in higher professional education every day, she had to get used to this informal writing style.

Renske: ‘I’ve been trained to write ‘university worthy’, with complete sentences. If students use colloquialisms, I correct them. So I had to get used to the informal style, but I also like it and I’ve learned a lot from it. Moreover, we get enthusiastic reactions to the texts.’

The project also made Renske think about communication tools in the university, such as PowerPoint presentations and study manuals. ‘Our means of communication are university worthy, but often quite boring. There is much to be gained if we attune it more to the students’ perception of the world.’

Titles and image reinforce each other

Each working method has its own title. For Renske, the importance of an appealing title became increasingly clear during the project.

Renske: ‘Two of the original working method titles were ‘Triade Conversation’ and ‘Multiactor Intervision.’ We received alarming reactions on those titles. ‘Erm, what do you mean?’ ‘Difficult word.’ ‘If you want to recruit people, you really have to come up with a different name.’ Those comments made me realize that we needed to pay more attention to the titles. Even though a title only consists of a few words. In the end, we chose ‘Triple profit’ and ‘Intervision outside your bubble’ as the new titles.’

Renske also points out the interaction between title and image. ‘Each working method has its own image. If we had a good title, it turned out to be easier to come up with that image. This applied, for example, to ‘Intervision outside your bubble’. In the image accompanying this working method, four people puncture each other’s bubble. You won’t come up with something like that with ‘Multiactor Intervision’.’

A lot of work, but then you have some

When asked about a last lesson, Renske reflects on the time investment. ‘Realize that such a project is labour-intensive, also as a client. If you want to do it carefully, you’ll have to think about a lot of choices, and check everything you create with your target audiences. But then you’ll get something really nice in return!’